No time to lose: from reception to integration of asylum migrants 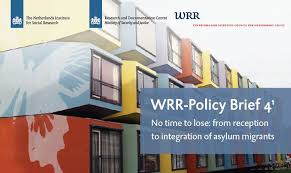 WRR-Policy Brief 4: No time to lose: from reception to integration of asylum migrants

In 2015, the public debate was dominated by moving images of migrants making their way to Europe and by the concerned reactions of European citizens to the asylum issue. Attention is currently focused mainly on the problems relating to the local reception of new groups of asylum seekers. At the same time, however, policymakers face a second fundamental challenge, which is the question of how to facilitate the integration of asylum seekers who have been granted a residence permit into Dutch society.

This policy brief focuses on this category of asylum seekers, who are referred to as permit holders. Just one in three permit holders between the ages of 15 and 64 living in the Netherlands have a paid jod and  many are permanently dependent on social assistance benefits. This represents  a waste of human capital and places an unnecessary strain on the country’s welfare system. It is therefore important to make integration a key objective from the start of the asylum procedure, which, in turn, implies two things:

The need for an accurate and rapid asylum procedure in which greater attention is devoted to the labour potential of permit holders and their opportunities in the labour market in the Netherlands.

The need for an approach in which language acquisition, schooling, securing housing and finding work occur simultaneously rather than sequentially. With such an approach, permit holders will be able  to support themselves and make a contribution to the receiving society sooner, which will in turn fortify public support for the asylum policy.